For my dissertation I am looking at masks and the effect they can have on the wearer but for this project I want to focus more on the effect a mask can have on the viewer. I want the mask to play with your mind and create an optical illusion effect. But more than that I want it to effect the viewer on a deeper level to highlight the significance a mask can have. Naturally even a simple mask can have an uncanny effect on a viewer and so I want to play on this for this project.

Ive done some research on the uncanny to inform this project:

“Freud’s theory of the uncanny is a latter-day theory of the sublime, of the imagination overwhelmed in a moment of bafflement but also exhilaration.” pg 74

What is the uncanny?  The uncanny is recognising something as familiar in a strange way, through a psychological experience. It sometimes describes objects or circumstances where a familiar thing or event is encountered in an unsettling, creepy or taboo context. To freud the uncanny was all about locating bizarreness within the ordinary.

He was a robotics professor at the institute of technology, he anticipated how people would react to human like appearance and gestures of robots. Specifically he thought that entially people would sympathise with the robots but this would quickly shift to loathing or repulsion when the robots failed to convincingly convey a human likeness. “Figure 1. The graph depicts the uncanny valley, the proposed relation between the human likeness of an entity and the perceiver’s affinity for it.”

“owing to great advances in fabrication technology, we cannot distinguish at a glance a prosthetic hand from a real one. …One might say that the prosthetic hand has achieved a degree of resemblance to the human form, perhaps on a par with false teeth. However, when we realize the hand, which at first site looked real, is in fact artificial, we experience an eerie sensation….When this happens, we lose our sense of affinity, and the hand becomes uncanny ”

The effect of movement: “Since negative effects of movement are apparent even with a prosthetic hand, a whole robot would magnify the creepiness.”

“Movement-related effects could be observed at the 1970 World Exposition in Osaka, Japan. Plans for the event had prompted the construction of robots with some highly sophisticated designs. For example, one robot had 29 pairs of artificial muscles in the face (the same number as a human being) to make it smile in a humanlike fashion. According to the designer, a smile is a dynamic sequence of facial deformations, and the speed of the deformations is crucial. When the speed is cut in half in an attempt to make the robot bring up a smile more slowly, instead of looking happy, its expression turns creepy. This shows how, because of a variation in movement, something that has come to appear very close to human—like a robot, puppet, or prosthetic hand—could easily tumble down into the uncanny valley.”

“I think this descent explains the secret lying deep beneath the uncanny valley. Why were we equipped with this eerie sensation? Is it essential for human beings? I have not yet considered these questions deeply, but I have no doubt it is an integral part of our instinct for self-preservation.The sense of eeriness is probably a form of instinct that protects us from proximal, rather than distal, sources of danger. Proximal sources of danger are corpses, members of different species, and other entities we can closely approach.Distal sources of danger include windstorms and floods. ”

The extent of human likeness/ hyper realism that would come from the mask i plan to make would create this eerie uncanny effect on the viewer. Although the wearer is human the mask strips their humanity and replaces it with a artificial version of themselves. by doing this and replicating the features in a hyper realistic fashion i’m creating an uncanny mask but only the wearers face is used.

I went to Rotterdam and visited the Kunsthal museum, there we saw a hyper realism exhibition where I found a lot of inspiration for this project. Although not its aim the sculptures created an extremely Uncanny effect. One particular piece by Evan Penny particularly inspired me due to its digital influence.

“A major theme in Evan Penny’s work is the ways in which perception has changed in the age of digital media. Our imagination he States is informed and limited by the particularities of the technology we have available to us. We have become so accustomed to the visual tricks that are employed to manipulate two-dimensional images that we are no longer aware of them.  By inverting the process and rendering these images once again three-dimensional as sculptures penny exposes the illusion and the deformity of the human image in the media age. This sculpture is based on photographic shot showing a conversation between penny and his friend and fellow artist Panagiota Dimos. rather than a series of snapshots we see a single image with the camera lens has remained open while the film spools from side to side.  the beaches are elongated unreadable transformed into a flow of colour and line in time and space. and experience penny than characteristically meticulously sculpt into solid matter. his work does not look like Panagiota but can be viewed as a more precise depiction of their conversation just like a conversation actually is focused and distracted clear and obscure.” 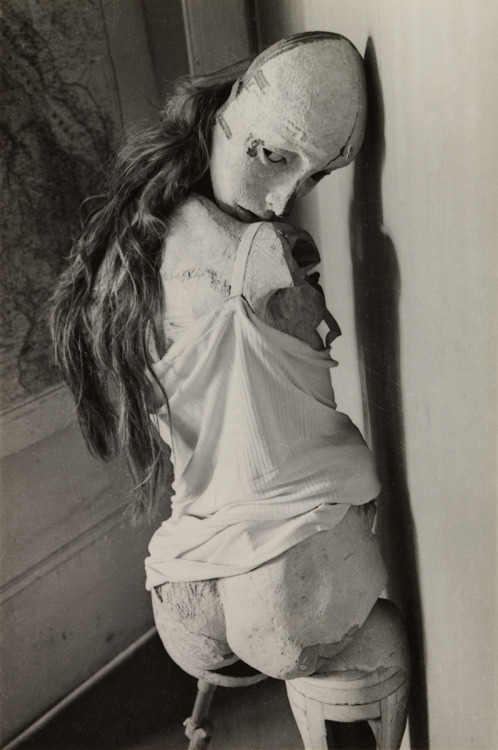 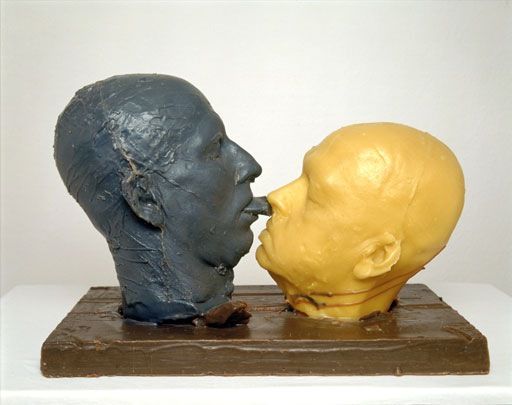 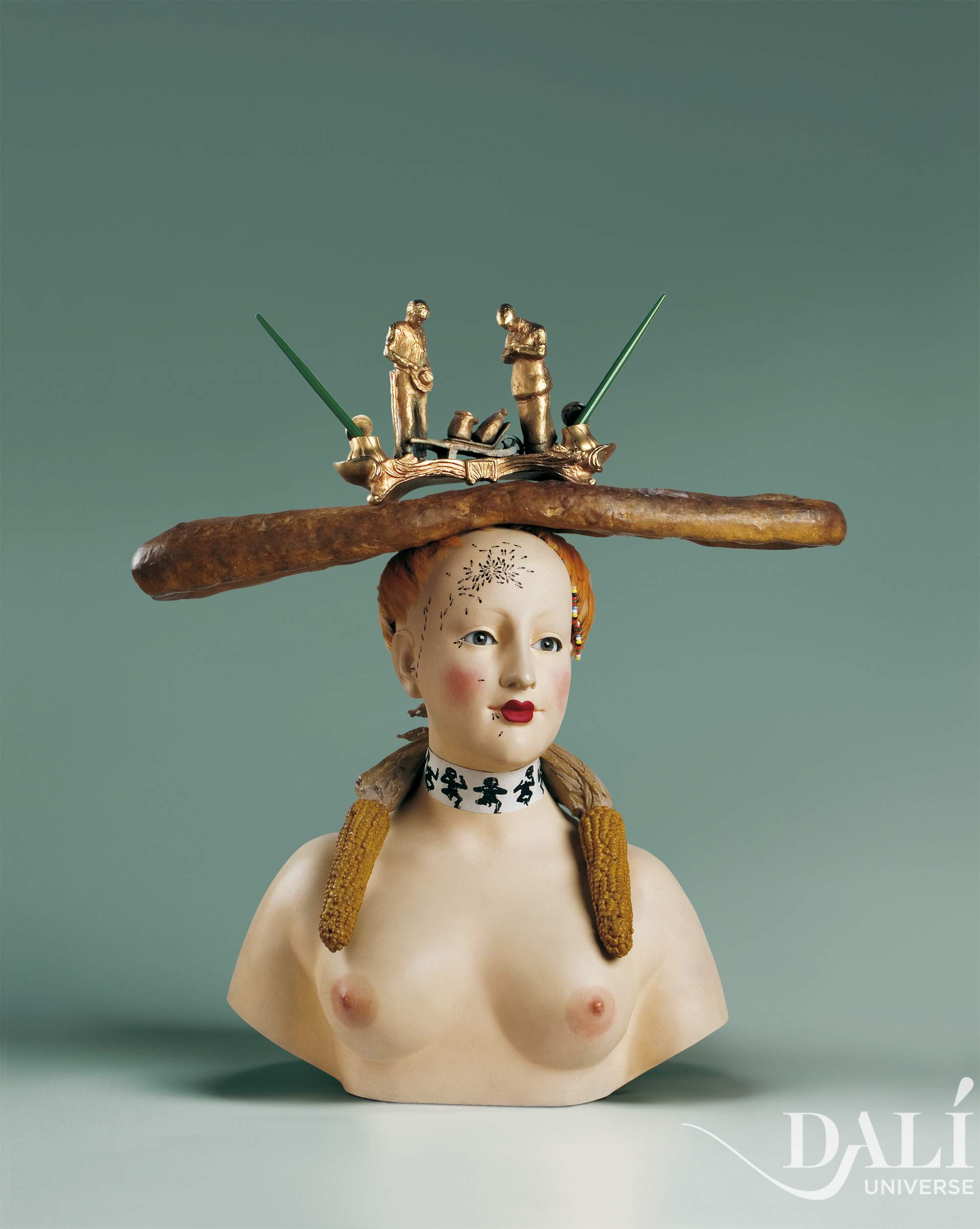 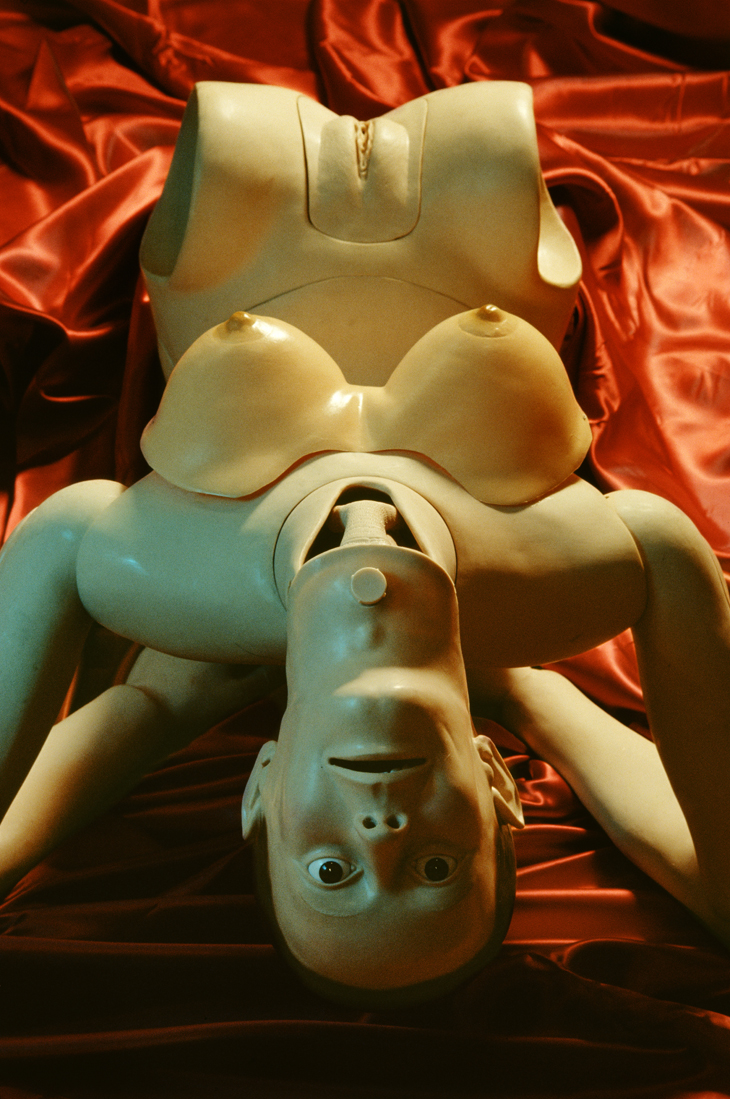