Context for my Make your mark project:

For my constellation essay, I have been exploring British pagan and folkloric masked traditions. During this research, I came across the tradition of Mummers plays something I am aiming to reinvent into a contemporary context for my final exhibition. I was particularly interested in this as during this research I found a mummers play from my home county of Berkshire from 1888 As this project is all about making MY mark I felt it was essential to focus on my own roots and cultural traditions.

Mummers’ Plays are folk plays performed by troupes of amateur actors, known as mummers or guisers. Mumming is best described as early pantomime. It refers particularly to a play in which a number of characters are called on stage, two of whom engage in a combat, the loser being revived by a Doctor character. This play is sometimes found associated with a sword dance though both also exist in Britain independently.

Mummers were originally bands of masked persons who during seasonal festivals in Europe paraded the streets and entered houses to dance or play dice often in silence. It is thought likely that the plays have links with primitive ceremonies held to mark important stages in the agricultural year. The name has been connected with words such as mumble and mute; with the German mumme (“mask,” “masker”). For this reason, my play will be silent and the actions of the actors and the masks themselves will do the majority of the communication.

Mumming spread from the British Isles to a number of former British colonies. It is sometimes performed in the street but more usually during visits to houses and pubs. It is generally performed seasonally or annually, often at Christmas, Easter or on Plough Monday, more rarely on Hallowe’en or All Souls’ Day, and often with a collection of money, in which the practice may be compared with other customs such as those of Halloween, Bonfire Night, wassailing, Pace egging and first-footing at new year.

Certain stock characters reappear in the Mummers Plays, in Sword Dances and in the various regional processional masked performances that are prevalent throughout Britain but appear to be concentrated in certain areas. The range of 19th-century midwinter animal heads that were carried from house to house accompanied by ritualised begging. The Hooden Horse is from Essex, the Mari Lwyd that I explored in my previous project is from South Wales, the Broad, a Christmas-tide Bull’s head is from the Cotswolds and the Derby Ram or Tup was from Derbyshire. (Hutton 1997) These animal-masked forms were often accompanied by the same stock characters who performed in the Mummers Plays, usually a butcher or enemy who slaughters the beast which is revived by a doctor. The doctor who enters, performs a miraculous, albeit comedic, cure on the body and in the process neatly performs the symbolic act of reawakening the earth from the death of winter.

While the religious significance of these collective performances very probably draws deeply from the well of religious significance in terms of birth, death, renewal and fertility, other features seem to be significantly present as recurring motifs. That is the inversion of social norms, turning the tables, the riotous behaviour, the cross-dressing and the use of masks as a disguise. All of which are themes traditionally associated with festivals and celebrations a time of celebration but also reflection.

My interpretation of these themes:

For my project, I want to use the base narrative structure of the mummers plays with the 3 stock characters that occur throughout different versions of the tradition: 1. Hero 2.Villain 3. Healer.  I wish to incorporate the concept of inversion of social norms in my interpretation by bringing to light a problem within modern society. I wish to address the destructive effect of man on our beautiful natural world through a symbolic and comic representation. The death and revival of the first character in this context will provide a message that we cannot fight mother nature she will prevail. At the end of my play, the characters nature and man dance together in harmony. This is to represent our need for cohesion with our world and to also express that it is totally possible if we detach from our destructive actions and embrace love instead. Mother nature won’t hold a grudge but embrace us with loving arms for we are one with the planet.

Incorporating an animal into the first character I feel is essential as the beast is a representation of the natural world and traditional in guise performances. I am going to draw influence for the design of this first character (a symbolic representation of the natural world) from the Derby Ram or Tup. From this tradition, a song still stands (Full song – http://wiki.changeringing.co.uk/The_Derby_Ram) and in the song, villagers strive to take all the can from the magnificent beast until just his bones are dragged away. I feel this tall tale mirrors my message as it displays people stripping the beast of everything they possibly can, a metaphor for what we as a species are doing to our planet. My reinterpretation of this tradition is an inversion of its own as the ram “fights back” and in the end prevails. 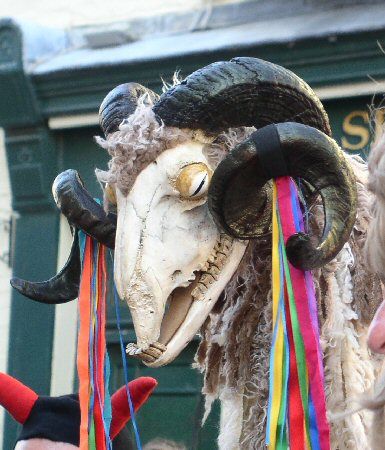 My second character will be a symbolic representation of man as a destructive species. Humans are devouring the earth and her natural resources, to emphasize this evil gluttony this character will have a very large demonic mouth. He will be a rotund man in a suit to highlight the contrast we have with the natural world.

My third character is going to be inspired by the cunning folk traditions. Cunning folk, also known as folk healers or (more rarely) as white witches, are practitioners of folk medicine, folk magic, and divination within the context of the various traditions of folklore in Christian Europe (from at least the 15th up until at least the early 20th century). There were many different variations of cunning folk but it is said that the modern day image of a stereotypical wizard is derived from a form of ceremonial magic which practitioners would wear long ceremonial robes for and uses alchemy symbols as the source of their magic. The source of this particular branch of magic stems from a magical text called The Key of Solomon a pseudepigraphical grimoire attributed to King Solomon. It probably dates back to the 14th- or 15th-century Italian Renaissance. It presents a typical example of Renaissance magic. It is possible that the Key of Solomon inspired later works, particularly the 17th-century grimoire also known as Clavicula Salomonis Regis, Lesser Key of Solomon or Lemegeton, although there are many differences between the books. 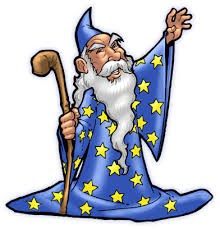