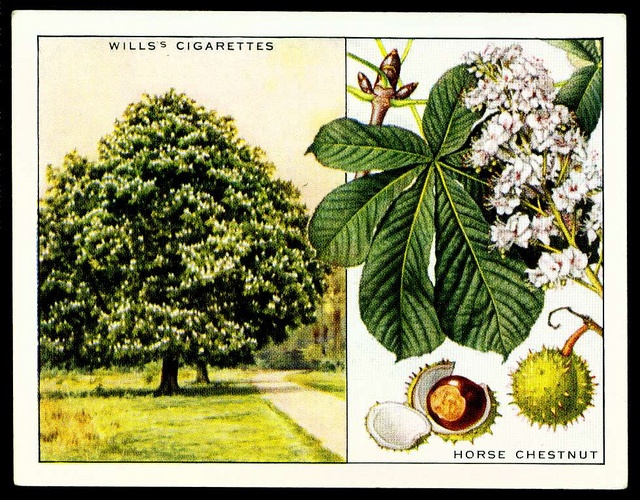 The wood of horse chestnut tends to be rather weak and for this reason, has never been widely used. However, it has absorbent properties that make it ideal for fruit racks and storage trays that keep the fruit dry and so prevent rotting.

Various extracts from horse chestnut leaves and fruits contain the active ingredients aescin or aesculin and are marketed as herbal remedies because of their anti-inflammatory properties.

Horse chestnut also has wildlife value. Chestnut trees are excellent additions to wildlife and butterfly gardens. They provide nutritious food for a number of birds and small mammals as well as a number of different types of butterflies and moths.

The Encyclopedia of Superstitions, Folklore and Occult Sciences Vol. 2 (1903) by Cora Linn Daniels records that it is considered lucky to carry horse chestnuts in your pockets, noting that “the Walloons carry three horse-chestnuts in the pocket, as a relief from giddiness!” – although quite why the folks of Belgium needed a cure for giddiness it sadly does not explain. However, this superstition seems to have grown and spread, for it is claimed all across Britain and America that carrying three horse chestnuts in your pocket is beneficial.

However the most common folk belief about conkers, and one that persists to this very day is that placing conkers around your house will repel spiders. And bizarre as it sounds, this method of keeping spiders at bay is sworn by by many arachnophobics.

Now as those who employ this method of spider control, assert that this is the case, it  would rather  suggest that the conkers themselves give off some kind chemical or scent that naturally repels spiders. However despite many tests, so far scientists have failed to discover any such compounds or substances in the humble conker. But apparently a natural property of the conker is an utter disregard of science, for it is still widely reported that conkers will keep spiders away. So possibly there is still some magic in the old horse chestnut tree after all…

Chestnuts can be eaten to encourage fertility and desire and may be carried as a charm by women who wish to conceive. This may be a form of sympathetic magic as the conker in its shell resembles the womb of a pregnant woman.

“Buckeye nuts are believed by some hoodoo “doctors” to increase a man’s sexual power. Shaped like miniature testicles, they are sometimes carried in the pants pockets as charms to bring men “good fortune in sexual matters.” In the southern and eastern regions of the United States, buckeyes are carried in mojo bags to cure or prevent such ailments as arthritis, rheumatism, and migraine headaches” (Gerina Dunwich, Herbal Magic, 86).

Cat Yronwode similarly cites buckeyes as charms for increasing male potency. Both Yronwode and Dunwitch, however, make it clear that a buckeye’s primary powers are to aid as a gambling charm and to help stave off aches and pains—particularly rheumatism and headaches. This view is heavily supported by a number of folklore sources:

From Newbell Niles Puckett, Folk Beliefs of the Southern Negro: