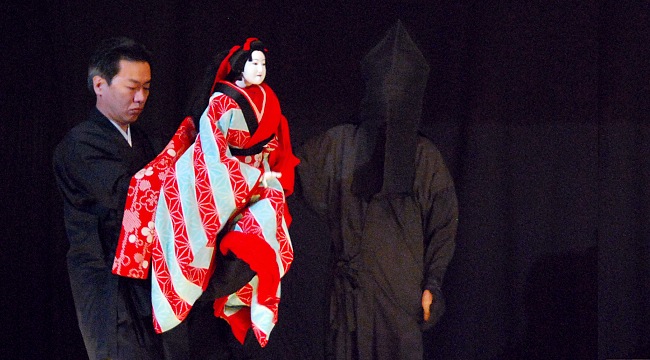 Bunraku (文楽) is the traditional puppet theater of Japan. It started of as popular entertainment for the commoners during the Edo Period in Osaka and evolved into artistic theater during the late 17th century. Along with noh and kabuki, it is recognized as a UNESCO Intangible Cultural Heritage.

Bunraku puppets are about one-half life size and each is operated by three performers: a principal operator and two assistants. Strings are not used, but rather the puppeteers co-operate to maneuver the limbs, eyelids, eyeballs, eyebrows and mouths of the puppets, thereby producing life-like actions and facial expressions. The puppeteers are in full view of the audience, but are dressed in black to symbolize that they are to be taken as “invisible”.

The puppet from war horse is made in a Bunraku style this is the concept I will be trying to apply to my dragon but on a larger scale. Rather than just 3 puppeteers my initial design includes 5, to compensate for the large size of the puppet.

My next step is going to be figuring out how these puppets are made and controlled to create such convincing movements.